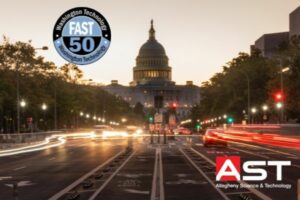 BRIDGEPORT, W.Va. – Allegheny Science & Technology (AST), an award-winning technology and energy firm, is pleased to announce that for the sixth consecutive year it has earned a spot on the Washington Technology Fast 50 list of the fastest-growing small businesses in the Federal government’s contract services market.

The Washington Technology Fast 50 represents the most successful small businesses in the government market in a given year ranked according to an eligible company’s five-year compounded annual growth rate in revenue with the just-released 2019 list based upon the five-year period 2014 – 2018. The list is put together by Washington Technology, a web-based specialty publication considered the foremost authoritative source of competitive intelligence for executives of small businesses in the federal contracting market.

AST ranked #33 overall on the Fast 50, with an annual growth rate of 53.7%. This growth reflects AST’s success in the areas of applied science & technology, mission assurance & support, and data & decision analytics for a range of federal civilian and military customers. ASTs’ sustained growth also reflects the professionalism, dedication, and hard work of AST employees in support of their customers.

“Making Washington Technology’s Fast 50 list for the sixth consecutive year is a true testament to the hard work and dedication of our employees,” said Arria Hines, AST CEO. “The team at AST works diligently to embrace our customers’ missions as their own which fosters a strong rapport with existing customers and builds a solid past performance for AST.”

The complete 2019 Washington Technology Fast 50 list may be viewed here.